Everybody acts a part to some degree; for politicians and princes it is part of the job description. The statesman and writer, the Marquess of Halifax (1633 - 95), in A Character of King Charles II called dissembling a Jewel in the Crown and warned: “Princes dissemble with too many, not to have it discovered.” 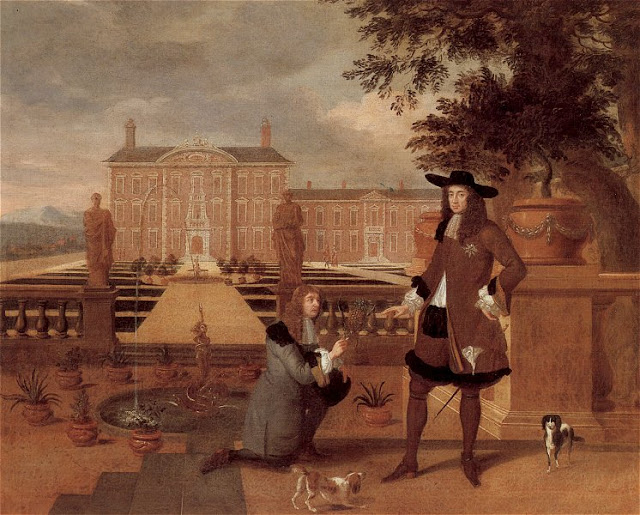 Charles II, attended by some of his favourite spaniels, being presented by the Royal Gardener, John Rose, with the first pineapple grown in England, painted by Hendrick Danckerts, c.1675.
Image source: Wikipedia

One of Machiavelli's observations was that princes must act the dual role of lion and fox, and that those who succeed most imitate the fox, which they should conceal by being "a great simulator and dissimulator".

Charles II was as capable and ambitious as his more powerful, and despotic, contemporary, Louis XIV of France. The cousins were both embittered by the humiliating experiences of rebellions in their youth. Though Charles presided over a far more informal court than Versailles, it was still his personality that dominated but through a "careless grandeur" [Aphra Behn] not the ritualized terror of the Sun King.

He kept his real feelings and beliefs, if he had any at all, hidden behind the suave persona that has passed into historical legend, the “witty king Whose word no man relies on” [Rochester].

He was "gracious”, “debonair and easy of access”, according to John Evelyn, who, while deploring the king’s easy nature that made him prey to crafty advisors, profuse mistresses and messy spaniels, admired his natural gifts and energy.

Rochester, for all he shared Charles’ sex addiction and moral sceptiscim, was just as frustrated as Evelyn by the waste of potential, the possibility of a glorious reign and a happy people dissipated by indolence and indifference, and the defensive dissembling, “sharpened by misfortunes”[Halifax], that hardened into a habit.

The weight of expectation at the Restoration, as at the outset of any reign, was unrealistic; Charles, even if he had been a more hard-working and candid king, would have incurred the disappointment of believers, as happened to Obama.

Charles Stuart was the monarch of a divided nation, of irreconcilable political, moral, religious and racial differences.

The character of King Charles became the prototype for a saturnine romantic fictional hero, the man who would have been an excellent prince but for a fatal flaw; the disillusioned rake with a kind heart; the sybarite who got up early in the morning to play tennis, and who rode his own horse to victory at Newmarket races; the predatory satyr who was a doting father; the cynical politician who trusted nobody and was romantically in love with his sister, Minette; flippant and gracious to the end, apologizing for his unconscionable time dying, solicitous about his most vulnerable mistress's welfare ("don't let poor Nelly starve"), polite to his wife, who of course adored him, hoping, true to the fantasy of women who love philanderers, that deep down, he loved her best.

And perhaps that is the secret of his charm for all of us: he is one of those historical or fictional figures who seduce our imaginations like intimate friends, giving us the illusion that we know him and would have fun with him.

Underneath, all he wanted was to survive, and had no scruples how he did so. He had learned by his early twenties that "the use of speech is to conceal the thoughts." [Machiavelli again.]

He is the only known double agent to have been a reigning king: the anointed Head of the Church of England who safeguarded a Protestant succession after his Roman Catholic  brother, and was always secretly Roman Catholic himself, at last received into the faith while he was dying; his whole personality a self-invented baroque illusion that he controlled so other men would not control him.

He famously enjoyed the public theatre, which flourished under his patronage and that of the literary members of his court, like Rochester and Buckingham, sensual, moral and intellectual nihilists who also understood the power of illusion.

Elizabeth I had turned dissembling and prevaricating in the cause of the Crown into an art form, as much part of the performance of ruling, along with sceptres and orbs, as of statecraft; but she was always loyal to her ministers, and worked with them, even if she did not personally like them, while Charles preferred to play them off against each other and pursue his own secret foreign policy.

He had no concept of responsibility except for his family and mistresses: he sacrificed two of his most steadfast and competent adherents, Montrose, the heroic general, and Clarendon, the statesman, for political expediency. Infidelity and double-dealing became his reflexes, the vicious feints of his constant charm defensive.

As Rochester complained contemptuously, Charles could not be relied on. Yet even his shrewdest contemporaries critics, like Halifax, and most modern biographers, male and female, were glamoured by him. “The merry monarch, scandalous and poor" was “still the easiest King and best-bred man alive" [Rochester].


Halifax was a serious writer, a practical politician and philosopher, not a high-society gossip, who thought that penetrating this king's character would leave an important lesson to posterity.

At the end of his analysis, Halifax indulgently forgives the King because of the frail humanity that binds us all: "What private man will throw stones at him because he loved? Or what Prince, because he dissembled?" [Halifax: A Character of Charles II].


"Everyone sees what you appear to be,
few experience what you really are"
[Macchiavelli: The Prince] 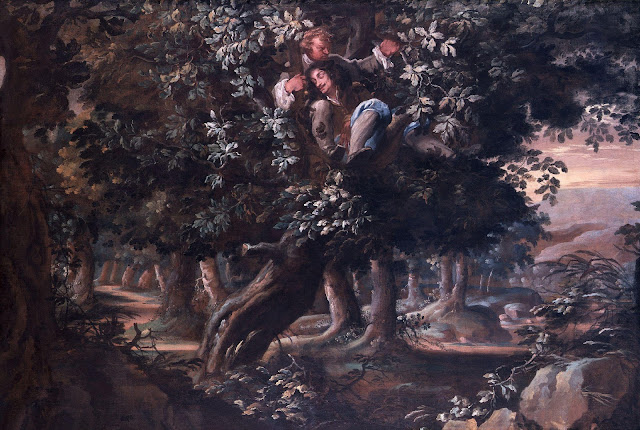 One of the series of unintentionally hilarious paintings of Charles II’s Escape by Isaac Fuller, commissioned after the Restoration to mythologize the true story of the king’s humility among the loyal common people who helped him when, disguised as a woodcutter, he was a fugitive after the Royalist defeat at Worcester in 1651. Charles’ familiar saturnine features are portrayed as they looked in his 30s, not as the 21 year old youth he had been at the time of his greatest danger. [Image source: Wikipedia]

Charles was a talented raconteur who fell into the habit of repeating the story of his escape too often at court to anyone who would listen, which does not preclude the profundity with which he felt his debt, personal and regal, to the courage and selflessness of his supporters, mostly Catholic recusants, excluded from privilege and power, who saved his life. He was a pro-European cosmopolitan who understood his country and its people. He appreciated the best of the British national character and knew the country's interests were inextricably linked to Europe.

On the same theme


THEATRES OF POWER:
ILLUSION IN THE AGE OF BAROQUE

Posted by Pippa Rathborne at 07:00