THE ETERNAL FEMININE Part One

Queen Louise of Prussia was a symbol of German national unity and womanhood over a century before those ideals were perverted by the Nazis. During her lifetime she was given more adulation than any other German queen consort; when she died aged thirty-four in 1810, during the Napoleonic wars that had humiliated Prussia, she was instantly mythologized....
She is still a popular subject of biography,  romantic fiction and blogs in Germany, where her bicentenary in 2010 was celebrated comprehensively with books and meticulously researched exhibitions re-appraising her historical significance and personality.

From every viewpoint she is a remarkable figure, and deserves far more recognition in Britain (too obsessed with its own 19th and 20th century princesses) for her cultural, social and political influence, as well as for the iconography and historiography associated with her name.

During the Napoleonic Wars, in which Prussia was conquered by the French, Louise, or Luise in German, provided inspiration to the nation and to her husband, King Frederick William III, who relied upon her resolution and courage to the extent that Napoleon mockingly called her "the only real man in Prussia".

She was born on 10 March, 1776, into the ducal house of Mecklenburg-Strelitz in Northern Germany,and brought up under the influence of the German Enlightenment. The family's prestige was raised by the dynastic marriages and personal accomplishments of its daughters.

Early lessons in a cycle of matriarchal loss and replacement informed Louise's personal quest for emotional stability and her adult sense of maternal and social responsibility. Her mother died when she was six; after two years, her mother's younger sister stepped into the gap as step-mother to the young family, but she died in childbirth only a year later.  Her grandmother, Marie Luise Albertine of Darmstadt, took over the care and education of the children of both the daughters who had predeceased her, bringing them up in a more affectionate and relaxed environment than was usual in contemporary aristocratic families.

She was married aged seventeen to the crown prince of Prussia, who succeeded his father as king in 1796, at the same time that her younger sister was married to one of his younger brothers. Naturally intelligent, strong-willed and energetic, inspired by the poetry of Schiller and Goethe, sustained by moral purpose and a belief in her historical destiny, Louise welcomed the power her royal status gave her to practice charity and  support military and social reformers within the Prussian government; she was a liberal modernist and romantic idealist among the European ruling class whom circumstances forced to adapt to Realpolitik.

She combined her career as queen consort, confidante and political adviser with devoted motherhood and marital loyalty, a balancing act which always demands extraordinary intelligence and patience. She fought for the country's independence from the opposing threats of imperial French and Russian power and, dying when the cause still looked hopeless, before the Allied victories of 1812 to1815, she was sanctified, a Prussian sacrifice to the Corsican Monster. 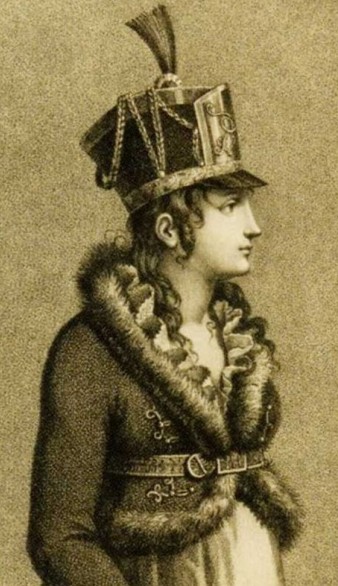 Resolute for war: in military uniform, 1806. Detail of an engraving after Swebach.

During the war, Louise, who loved clothes both for their own sake and their iconic value, commissioned portraits of herself in uniform, symbolizing her support of a defiant war policy rather than appeasement and indicating that she was fully in control of manufacturing her own public image. French propagandists seized on her penchant for wearing military attire as material for ribald caricatures.

Napoleon, piqued by her rival star quality, relieved that "my beautiful enemy", though seven centimetres taller than him, was a mere woman, was patronising about her at the time they met at Tilsit in 1807, boasting to Josephine that she was full of coquettishness towards him (in reality Louise was pregnant, as usual, and had other things on her mind), but after she died he acknowledged her significance in statecraft, saying that her husband had "lost his best minister".

There is no reason to believe he was joking: he liked to sum up his Prussian adversaries in epigrammatic sound-bites. On occupying Berlin in 1806 he had acknowledged the achievements of Frederick II by saying to his marshals when they visited the tomb of Prussia's last great king, "Hats off, gentlemen, for if he were alive now, we would not be here." There was no man left among the Hohenzollerns to stop the enemy; the royal family fled Berlin for exile in east Prussia for three years, and were forced to accept Napoleon's humiliating peace terms.

Louise's influence in the government was not resented during her lifetime or afterwards for two reasons. Firstly, she had the advantage of being German-born, unlike the unpopular English princess Vicky, wife of Louise's liberal grandson Frederick III, whose own far-sighted political views were despised by Bismarck and her son, Kaiser Wilhelm II.  Secondly, was the perception of Louise, who bore ten children in seventeen years of marriage, as a good mother. The maternal aspect to her personality, perpetually nurturing and protecting rather than challenging male hegemony, ensured her eligibility for national icon.


Rather than being glorified, her identity was stolen and distorted. In the immediate aftermath of her death, she was seen as a broken-hearted victim of Napoleonic chaos, the tender mother who needed avenging. Nothing Louise had ever done or said suggested she saw herself as a victim; rather she assumed the responsibilities of privilege as willingly as the luxuries.

Her legacy of support for national unity through government reforms and her active resistance to foreign occupation - "for God's sake, no shameful peace" - was purloined by successive authoritarian Prussian regimes for an idealogical justification of a militaristic state, culminating in the use of her persona in Third Reich propaganda. The benevolent princess of the Enlightenment who had been turned into a saint was now a fascist Brunhilde. In the 1920s, she was the cult figure for a sinister right-wing women's group called the Koenigin-Luise-Bund, which allied with Hitler and merged into Nazi groups.

Louise is one of the few reputed beauties in history who actually looks pretty by our own standards in the early portraits, artists of varying accomplishment all striving to capture the sweetness and vivacity of her expression.

The strains of war and years of almost incessant breeding for the Hohenzollern dynasty took their toll, but the young Louise, tall and slim, would pass for a voluptuously alluring celebrity babe today. The later portraits, when she was in her early thirties, concentrate more on the dignity of an internationally respected political leader, conveying intelligence and calm resolution.With her royal status, good looks, spontaneous charm, fashionable clothes and charitable works it is a blessing she was not born two hundred years later, when she would have been immolated by the media. When she died, the nation was convulsed in collective grief.


The parallels to modern Diana worship are obvious, but to seek more profound similarities in their individual characters is specious. They were both aristocratic products of their time whose personalities were largely formed by public and cultural expectations, and by external political events requiring very different responses.

Louise was an exemplary daughter of the later European Enlightenment, its ideals of benevolent absolutism battered and reshaped by the clash with revolution, in a battle still full of hope for the future; Diana of late 20th century's democratic Romanticism with its exclusive concentration on the fulfillment of self, in an age when it is impossible for the observed.of all observers not to turn into a parody of themselves.

Louise lived through a cataclysmic war, Diana through a disillusioned leisure-filled peace; they had different concepts of duty and personal liberty, and influential though she was over her husband through her superior intelligence and strength of personality, Louise would never have questioned her obedience to him.

The tribulatations of the last four years of her life as queen consort, most of them spent in exile in east Prussia, were solaced by her happy family life; she was her husband's best friend in a union of psychological opposites (a matrimonial definition that makes the cultural link between the contemporaneous German queen and Jane Austen made by a recent themed Prussian Neoclassical-English Regency costume ball at Schloss Paretz look less superficial than it first appears).

The cult of Koenigin Luise was excessive enough in her own time. Later in the 19th century, Theodor Fontane, whose grandfather had been her private secretary, deplored her contemporaries' glorification of her virtues: “Mehr als von der Verleumdung ihrer Feinde hat sie von der Phrasenhaftigkeit ihrer Verherrlicher zu leiden gehabt.” ("More than from the defamations of her enemies, she suffered from the hyperbole of her exalters".) The real woman became so entangled in the myth, it quickly became impossible to see her.
At last, two hundred years after her death, we can reclaim her from religiose romanticisation and misogynistic nationalism and try to see, if not the real Louise, at least a three-dimensional representation of her.

She deserves recognition as one of the last of the Enlightenment's children among the European ruling class, educated under the principles of Rousseau, her imagination and taste fed on Schiller, Goethe and Shakespeare, a princess with liberal sympathies who could say after climbing the Schneekoppe mountain that she felt nearer to her god, and mean it.

Her virtues in personal and public life were enough to please everybody, making her the embodiment of domestic, cultural and political virtues, a three-in-one goddess on whom disparate groups continue to project their aspirations and prejudices, shifting the focus as it suits us, a once and future heroine who still charms and touches.

Posted by Pippa Rathborne at 09:57