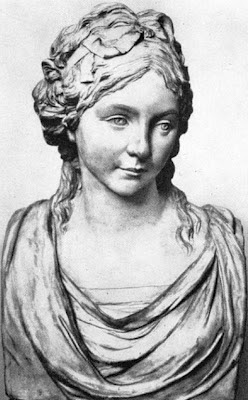 
The younger sister of Queen Louise had a tarnished career compared to the adored Prussian Madonna....
....in a much longer life defined by unlucky marriages of convenience and necessity. Aged 15, she drew the short straw in the double marriage of the princesses of Mecklenburg Strelitz to two Prussian princes, the virtuous, strictly monogomous heir to the throne, Frederick William, and his brighter but dissolute younger brother, Louis Charles.

Amid the usual double standards about male and female adultery, there were salacious rumours that during her marriage, Friderika, instead of meekly suffering her unfaithful husband's neglect, retaliated by having an affair with one of his uncles, Louis Ferdinand, the most gifted Hohenzollern of his generation and a much admired personality at court.  He was only a year older than Friderika's husband, and six years her senior.
Their brief relationship, if it ever existed beyond an unconsummated attraction, has never been proven; of all the men with whom she was associated, he was the most attractive. Like his uncle, Frederick the Great, he was musical, and accomplished enough as a dilettante pianist and composer for Beethoven to dedicate his Third Piano Concerto (1803) to him, and, thirty-six years after his death, for Liszt to compose his Élégie sur des motifs du Prince Louis Ferdinand de Prusse. He died heroically in battle, in 1806, after a disastrous decision to engage the enemy at Saalfeld.

Friderika's husband died in 1796, leaving her a widow at only eighteen, with three infant children. She started an affair with another German prince, Solms-Braunfels, and they married in 1798 to suppress the scandal of her pregnancy. He turned out to be a depressive alcoholic; his own family advised a divorce, a solution rejected by scandal-sensitive Friderika until she met her cousin Ernest Augustus, Duke of Cumberland, fifth and reputedly most competent son of George III of England and Queen Charlotte. He was a blunt cavalry officer of reactionary Tory sympathies already infamous for having been accused by his political opponents in England of murdering his valet, amid rumours of a sexual cover-up.

Friderika was freed to marry a third time by the timely death of her second dissatisfactory husband in 1814, but at the price of malicious, and, considering the state of his liver, unfair gossip that she had poisoned him. The rackety coupling of Cumberland and Friderika outlived notoriety to achieve respectability in middle age as king and queen of Hanover. She died in 1841, aged 63.

Her final domestic misfortune was the blindness in both eyes of her son, caused by the cruel coincidences of childhood illness and an accident in his youth. He withdrew into his own deluded world of autocratic power, endemic among the closely related 19th century German princes, for which he was deposed as king of Hanover in 1866.

ONCE AND FUTURE HEROINE

STAGE-STRUCK: Marie Antoinette and her theatre
Posted by Pippa Rathborne at 18:06