Queen Louise of Prussia
When she began her public career at the age of seventeen as wife of the Crown Prince of Prussia, just at the moment when European women's fashion was being revolutionized in the mid-1790s, Louise enthusiastically adopted the new simplified and informal style of dress that rejected the sometimes grotesque constrictions of the ancien regime.

Tischbein's meltingly lovely evocations of Louise between 1794 and 1796 show off the legendary nymph-like beauty which made her a leader of German neoclassical fashion. She loved clothes, their colours and textures, and the make-believe powers of dressing-up. When she was young, she wore daringly modern, almost transparent, dresses, cut low in front and at the back, far more avant-garde than royal ladies are allowed to wear on public duty nowadays.

Louise was a privileged child of the Enlightenment, educated in contemporary German Classicism and in Romantic sensibility to nature. She was a contemporary of Jane Austen and shared the same preoccupation with the harmonious union of sense and sensibility, of spontaneity and convention, a much harder balancing act at the Prussian court than at Pemberley.

So she naturally approved of the rational aesthetic that inspired the high-waisted, loosely-fitted gowns, made of transparently thin linens and muslins, or light silks, cut to follow the natural lines of the body without the artifices of corsets, hoops and paniers.


Beauty is found in the plainest of royal women, but the surviving evidence suggests that Louise was genuinely attractive. She was impressively tall (1.75), well-proportioned and pretty as a picture.
The absolutist, militaristic Prussian monarchy had found its best propaganda asset since Frederick the Great in a living symbol of ultra-femininity - or so it seemed. 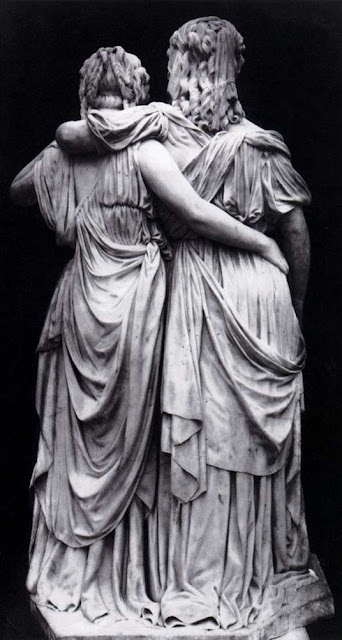 As queen, she recognized the iconic value of clothes in projecting a public and political image, and spent extravagantly on them. During the royal family's exile after the capture of Berlin by the French, she used the relative plainness of her dress as a symbol for her sympathy with the privations of the Prussian people under enemy occupation and her personal opposition to the humiliating alliance with Napoleon. At the same time, she made sure she was up-to-date with French fashions.

In her late teens, while still Crown Princess, and intermittently afterwards, she was frequently portrayed wearing a white muslin or gauze scarf tied round her head and under her chin. Despite the accessory looking as glamorous as a modern post-facial surgery strap, the ladies of Berlin rushed to emulate her.
Her historic image became inescapably associated with this white headscarf which most biographers used to assume was hiding a temporary swelling on her neck, probably a goitre. They were taking a hint from the sculptor Schadow, who, bemused by her choice of headdress for the Prinzessininnengruppe, concluded that she was concealing a thick neck.

Though they had dispensed with much of the formality of pre-Revolution dress, even the most emancipated ladies of Louise's time still observed the propriety of a head covering or bonnet of some sort whenever they went outdoors or received visitors during the day, staying as close to classsical or oriental themes as they could, and painstakingly looking as spontaneous as possible. There are descriptions in French fashion magazines from 1792 onwards of head and neck scarves tied in a similar way to Louise's. [Notes to Luise - The Queen's Clothes, a superbly researched exhibition at Schloss Paretz in 2010].

Rather than hiding a blemish on her naturally round neck, the idealistic, politically engaged young princess may simply have been following the latest egalitarian fashions from Paris, in the same spirit that a modern rich girl might wear pre-ripped designer jeans.

Other princesses, as much as any of us, have made fashion mistakes for less noble reasons.
This headddress is a transition between the eighteenth century style of large bonnet over a muslin cap and the new minimalist look. Lawrence painted Sarah Siddons in a muslin headdress, inspired by a Turkish turban, with chin strap, in about 1797, tied in a similar style to the one in which Louise had been depicted the year before:

The contrast of a modest white scarf tied round the head, often with transparent drapery floating behind, and unruly curls of hair escaping over the face, to accessorize a simple white robe like that of a pagan priestess, was the epitome of the new idealism in fashion, the tension between forces of restraint and nature, not a young woman's eccentric vanity: 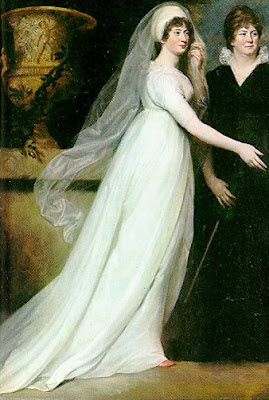 Independence: neoclassical fashion as worn in the United States of America, 1800/01. Detail from Copley's painting of Colonel Fitch and his Sisters

By the time she became queen in November 1797, Louise's neck was regularly portrayed as bare in court portraits and family groups. At the turn of the century, following fashions from France and England, her hair was cut shorter, and worn in a Grecian style:

Louise continued to experiment with wearing scarves, tied in different ways depending on the occasion, sometimes swathing her neck completely in a masculine-style stock:

WARRIOR QUEEN
The handsome, fuller-faced woman in her early thirties wearing a white stock with a dashing riding habit and hat, inspired by hussar's uniform, is a far more sombre personality than Vigée Le Brun's delectable babe in sugary pastels of 1801, five years before Prussia's defeat by Napoleon tested Louise.

Louise the military and political leader was also by this time a mother of nine.

THE ROMANCE OF THE ORIENT
Cultured European women in the 18th century had long been adopting Ottoman influences in their dress as exploration and diplomatic contact with the east increased. After accompanying her husband's embassy to Constantinople in 1716, the emancipated intellectual, Lady Mary Wortley Montagu, was frequently seen in Turkish dress, sometimes in a style which prefigured the fashionable silhouette of the Empire and English Regency:
At Louis XV's court in the 1740s and 50s, both his mistress, Madame de Pompadour, and one of his legitimate daughters were painted in Turkish dress. Liotard's portrait (1753) of Marie-Adélaïde curled up on a sofa, wrapped in a book, is an astonishingly relaxed image in contrast to the usual flowery artifices of the Rococo.
Turbans of various kinds, simple or decorated with plumes and jewels, that had reappeared as informal headwear for fashionable women, for the first time since the Renaissance, in the pre-revolutionary 1780s, became a craze after Napoleon's Egyptian campaign (1798 -1801).

The headdress acquired prestige among intellectuals through its association with the free-thinking, living and loving Madame de Staël, who wore enormous, attention-grabbing turbans of brightly coloured silks:

Queen Louise was portrayed in oriental inspired headdresses from the turn of the century. Schroeder's portrait of her, of around 1800 to1802, shows the style of turban, with symmetrical long hanging ends, that she is described as wearing at the historic meeting with Napoleon at Tilsit in 1807, when she pleaded on her knees for fair terms on behalf of  her defeated country:

THE ETERNAL FEMININE
THE HUSBAND WHO LOVED UNIFORMS
TEN CONTEMPORARIES OF LOUISE
Sarah Lund: ONCE AND FUTURE HEROINE
Posted by Pippa Rathborne at 11:00