The husband who loved uniforms

MARRIAGE OF THE WEAK AND THE STRONG

It was easy to make fun of the warrior queen and her feeble husband, emasculated by indecision, both of them dressed up in military uniforms while the once invincible Prussian army ignominiously lost half the country to the enemy, but the evidence suggests that the marriage was based on mutual trust and respect, a sympathetic friendship at its heart.....
....Louise was seventeen when she married Frederick William, the twenty-three year heir to the Prussian monarchy. She viewed marriage as a vocational career, on a Rousseauian model, identifying herself with her husband's personal, political and cultural interests. Fortunately for Louise, her prince, though autocratic, was uxorious and had neither inclination nor will to subjugate her. Frederick William was pious and reserved; he also adored his wife and relied upon her energy and judgment. He trusted her more than any of his ministers. They had tastes and enlightened principles of kingship in common, and complemented each other temperamentally. They had ten children together, seven of whom survived infancy.

A model of rectitude in his private life and dedicated to his role of Landesvater, finicky about appearances and incapable of big decisions, he was unsuited to lead his country during the Napoleonic wars. He would have preferred to keep Prussian neutrality; Louise, with her sense of history, romantic lust for glory and political intuition, embraced the cause of war and Prussian independence like the true successor of Frederick the Great and the Great Elector of Brandenburg. Unfortunately for the ardent pro-war faction in Berlin, the Prussian military system that had seemed invincible at the time of Frederick's death twenty years earlier had worn itself out under the mismanagement of incompetent generals and was totally unprepared for Napoleonic warfare. The scale of the army's defeat shattered the self-belief of the Prussian state, which Louise, through her promotion of reforms and the symbolic value of her personality, helped to rebuild.

Resolute in war: Louise in military shako. Engraving after Swebach, 1806

It was easy for Napoleon and French caricaturists to make fun of the warrior queen, riding through the streets of Berlin at the head of her regiment, and her timid husband, both of them dressed up in military uniforms while the once invincible Prussian army ignominiously lost half the country to the enemy, just as a century later the Nazis contrasted his unmasculine weakness with Louise's bellicosity, but the evidence suggests that the marriage was based on mutual trust and respect, a sympathetic friendship at its heart. The affectionate informality of their homelife was unprecedented at the rigid Hohenzollern court and much admired by contemporaries, three decades before the exemplar of Queen Victoria and Prince Albert's family-centred respectability took hold of middle-class British society.

The Louise myth casts a long-lasting spell, and it is tempting to speculate that the reactionary policies and religious persecution of the later part of Frederick William's reign would never have occurred under her influence. In her short career as queen she had supported social, economic, military and educative reform; but she always knew the limits of her husband's political enlightenment. The union of German Protestant sects in 1817 that provoked the emigration of thousands of non-conformist Lutherans had been close to the Calvinist king's heart for so long, it is unlikely that the good wife would have checked the unwavering evangelical fervour of this otherwise vacillating man.

Like Victoria, the English princess who also enjoyed a happy marriage to a relatively liberal Prussian prince in the second half of the nineteenth century, Louise would have struggled futilely against the prevailing authoritarian tendencies of the state. Dying young as she did, her symbolic flame of national resistance remained alight; she never had to suffer outgrowing her own ideals and popularity.

Any spirit of courageous resistance and political reform left the King with Louise's death. Prussia was forced to enter an alliance with France, and only fought back against the enemy occupation after Napoleon's defeat in Russia. The Prussian nationalism that Louise had inspired rallied in the Befreiungskriege, the Wars of Liberation (1813 -1815) in which her image as the mother of the nation whose wrongs must be avenged was used to unify all political and social groups in a struggle which ended in victory for the dynastic regime and the crushing of democratic hope.

After her death, Frederick William found solace in memorializing her in portraits and sculpture as the perfect wife and mother, insisting for his own peace of mind that the figure on her tomb be represented in everlastingly gentle sleep. He started a relationship with his only recognized mistress in 1822, twelve years after Queen Louise’s death, and married her morganatically two years later. He could not live without the companionship and sympathy of a woman, he said.

One of the bonds of the marriage between Louise and Frederick William was their shared love of fashion. As a Hohenzollern, he could not escape his hereditary martial associations, but he was completely lacking aggressive instincts and soldierly ability, let alone the military genius of his great-uncle, Frederick the Great.

Instead, he was obsessed with uniforms, and enjoyed wearing, designing and updating them, though not to the narcissistically manic degree of his and Louise's egregious great-grandson, Kaiser Wilhelm II. A fastidious dresser, Frederick William took great interest in his own and his wife’s clothes, granting her a generous allowance for her extravagant wardrobe while often criticizing her fashion choices, and her use of rouge and expensive skin creams.

This well-intentioned, sartorially sensitive and least warlike of Prussian kings, the antithesis of the Nazis' Neue Mensch, instituted the Iron Cross (Eisernes Kreuz) medal for bravery in 1813, that above all other decorations became synonymous with Prussian militarism, surviving in official and popular German culture to this day. Its origins lay in another cultural mindset, an elegant neoclassical design in black and silver by the architect Schinkel, the cross itself a romantic tribute to the traditions of the medieval Teutonic Knights. The official award was backdated by a week to March 10th, Queen Louise's birthday.

The following year, Frederick William created an honour for women in memory of Queen Louise, an Order that could include up to one hundred German women drawn from any social class who had distinguished themselves in sustaining the homeland during wartime with the traditionally feminine virtues of care, faith and hope. 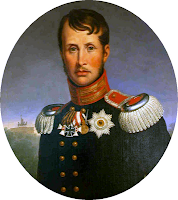 Uncertain in victory and defeat: among the medals decorating Friedrich Wilhelm is the Iron Cross.
Oil painting after Gerard. Image source: Wikipedia

The criteria for both these Orders were more democratic than any other in Prussia, rewarding even the least privileged of subjects, military and civilian, male and female. They gave a glimpse of the kind of unifying nationhood envisioned by Louise, but they were chivalric gestures of the king's love for his dead wife, not of conviction in a liberal State. Bereft of her strong-willed guidance, he was too traumatized by the effects of revolution and the humiliations of war to experiment further with social reform, and as soon as the old European order was restored in the peace settlement of 1815, he barricaded himself behind a repressive government and reneged on a promise to give Prussia a constitution.

By erecting monumental shrines and creating national awards in her honour he could pretend to himself and his people that he was still conducting policies of which she would have approved. Her face in the placid sleep he had ordered for her tomb betrayed no sign of reproach or disappointment. The false reincarnations of Koenigin Luise were begun by the husband who loved her.


From triumphant peace to defiant militarisism:
Sister of a Heroine

Posted by Pippa Rathborne at 00:00