JANUARY 13TH
Some posts are linked so tenuously to matters of any weight or substance, that if I didn't know better, I'd suspect a case of Blogger's Block. For instance, consulting a calendar of historical events in the hope of spinning a Universal Truth makes me cringe because I despise anniversaries. Birthday, Smurfday. There's no date in the year with a better guarantee of a marital bust-up than a Wedding Anniversary. A calendar, as the Mayans knew better than we do, should be a strictly utilitarian device, not obscured with silly layers of superstition and nostalgia. 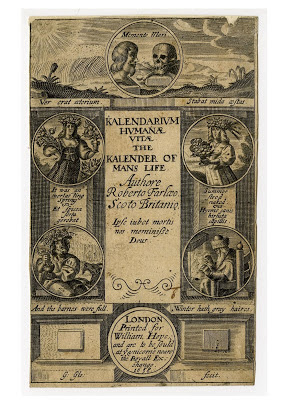 Engraving by George Glover for the title-page to Robert Farley, 'Kalendarium humanae vitae, The Kalendar of Mans Life' (London, William Hope, 1638)
© The Trustees of the British Museum.

But take at random some news headlines for January 13th, and perhaps you will boggle that they are not from 2013. The details, the names of people and places, have changed, but not humanity, either for good or bad....

Following its atrocities during the siege of Ma’arrat, the Western allied army has set fire to the city.

1099: Crusaders set fire to Marre, as they called it, in Syria, following a massacre and incidents of cannibalism, reported by both Christian and Arab sources. During their siege of the city in the preceeding November and December, the allied Norman leaders, unable to feed their troops, had lost control of discipline, and some of the starving soldiers savagely murdered and ate the Muslim inhabitants.
The Harrowing of Hell, illumination from the Melisende Psalter,
by an artist working in Jerusalem c.1131-43. Image source: Wikipedia

After a public performance of a new satirical play at a fringe theatre, two of the authors have been arrested for inciting protest against corruption and cronyism in Government and City.
1605: Ben Jonson and George Chapman, two of the authors of Eastward Ho!, were charged with sedition after a performance of the play at the Blackfriars Theatre. The third playwright involved, John Marston, fled London to escape arrest. It was the same year as the Gunpowder Plot; the government was suspicious of papist conspiracies, and its authoritarian reaction was intended more as a general public deterrent, than vindictiveness against artistic expression. The King himself, after all, was a published author himself. Jacobean political censorship was flexible, motivated more
by immediate propaganda concerns about how domestic factions and foreign powers would react to the circulation of controversial ideas at a particular moment, than by a programme of ideological oppression

There was even a happy ending for the controversial Jonson, who had been in and out of prison for other offences: he was rewarded with the job of court poet and Eastward Ho! was eventually performed at court in 1614. James I, having gone through the motions of punishing him for his attack on the cupidity of the King’s Scottish Favourites, was far keener to recruit the versatile, "rare Ben Jonson", whose love poetry was as ethereal as the social criticism of his plays was harsh, to aggrandize the Stuart dynsaty in court masques, than keep him festering in opposition.

Far from being muted by royal protection, Jonson’s public satirical voice was strengthened in his subsequent plays, the great comedies that exposed the vices and absurdities of contemporary society, above all the corrupting obsession with money.

James I, who loved a debate, was genuine in his attempts to reconcile the fractious Protestant and Roman Catholic groups within the established Anglican church. He was politically rather than religiously inspired in the search for a settlement that would support his own theory of the Divine Right of Kings and his pacific foreign policy. His sympathetic treatment of the Catholic Jonson contrasts with his consistent persecution of another brilliant writer, the Protestant Sir Walter Raleigh, the handsomest Renaissance man in the kingdom, lyrical poet, historian, entrepreneur and politician, whose anti-Spanish activities challenged James’ policy of appeasement. Everything about Raleigh, including his promotion of tobacco, irritated the non-smoking King, usually so susceptible to male charm. 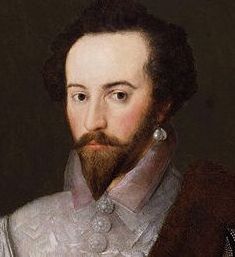 Handsome and charismatic, then and now. Detail of anonymous portrait of Raleigh, c.1588.

James' treatment of Raleigh was the focal point of the dissension between the King and his heir, Henry, Prince of Wales, one of the might-of-been kings of history, decisive and uncompromisingly Protestant, his virtues exaggerated in his lifetime and afterwards to represent everything that his father and younger brother, Charles I, were not. Henry condemned his father's imprisonment of the great Elizabethan hero, and did not live to use his influence to save Raleigh from execution, a sacrifice to Stuart short-term politics, the way Charles I was to sacrifice his greatest minister Strafford, and Charles II his greatest general, Montrose, for no other reason than to placate their enemies.Though he was only eighteen when he died, Henry had been active in the creation of his own iconography through commissioning chivalric images of himself as a warrior prince and playing fantasy heroes in Jonson's masques, written specially for him, costumed as a Roman hero by Inigo Jones. 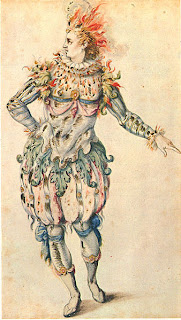 A Star: masque design by Inigo Jones for a courtier in Oberon the Faery Prince (1611). Image source: Wikimedia Commons
Raleigh’s and Jonson’s poetry survives amongst the most haunting of English lyricism, words as translucent as the pearl that hangs from Sir Walter's ear in his portraits. Jonson’s plays are another matter - though the themes, particularly his remorseless anti-capitalism are always strikingly topical, they are usually deathly to watch in modern theatre productions that do them a disservice by trying too hard. The vernacular that originally gave his dialogue such vitality is now mostly impenetrable. Nothing dates more badly than jokes, particularly about yesterday’s news, but the street slang and characterizations of City and political frauds provide invaluable historical material. THE FAERY PRINCE

A bank has collapsed after a major European country declares bankruptcy
1607: The Bank of Genoa failed after announcement of national bankruptcy in Spain.

A new moon in the galaxy has been seen through an advanced telescope.
1610: Galileo discovered Callisto, 4th satellite of Jupiter

French novelist has published an attack on an anti-semitic military establishment’s perversion of justice and wrongful imprisonment of an innocent man as part of a government cover-up of a spy scandal. The writer is being prosecuted by the government for libel.
1898: Emile Zola, scourge of the bourgeoisie, published J'accuse, history’s most famous open letter, in defense of the Jewish army officer Dreyfus. 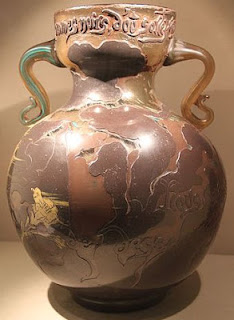 Glass vase "Les hommes noirs" by Émile Gallé and Victor Prouvé, depicting evil mutations of human nature, displayed in Paris at the 1900 Exposition Universelle.
Image source: Wikipedia Commons.
Gallé risked the profits of his successful glass and ceramics manufacturing business by using his art works to publicly denounce the prejudices and lies that had scapegoated the innocent Jewish officer, Dreyfus.

Matter arising from January 13th, 1898:
ARTISTIC UNITY IN THE CAUSE OF IMPROVING HUMANITY 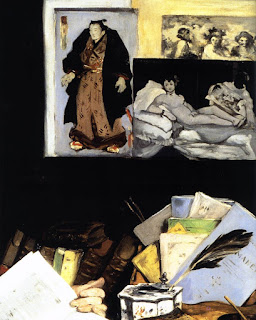 Detail of Manet's portrait of Zola (1868) in the Musée d'Orsay, Paris.
Image source: Web Gallery of Art
Thirty years before he engaged in the Dreyfus scandal polarizing French society, Zola had used his pen as a weapon to defend the painter Manet, whose works had been rejected by the Salon for their alla prima style and shockingly realistic subject-matter. Symbols of an intellectual and artistic friendship are in the still-life details of the background to Manet’s portrait of Émile Zola, painted in gratitude to the writer. The inkpot and blue-covered pamphlet refer directly to Zola’s recent publication; of the pictures on the wall, Olympia was Zola’s favourite of Manet’s works, and the one which, along with Le Déjeuner sur l'herbe, had aroused most bourgeois outrage; the Velasquez engraving emphasizes their shared admiration for the great Spanish painter; and the Japanese print acknowledges the crucial influence of Far Eastern art on 19 century European aesthetics and painting techniques.
Posted by Pippa Rathborne at 00:00