The Gathering in a Park 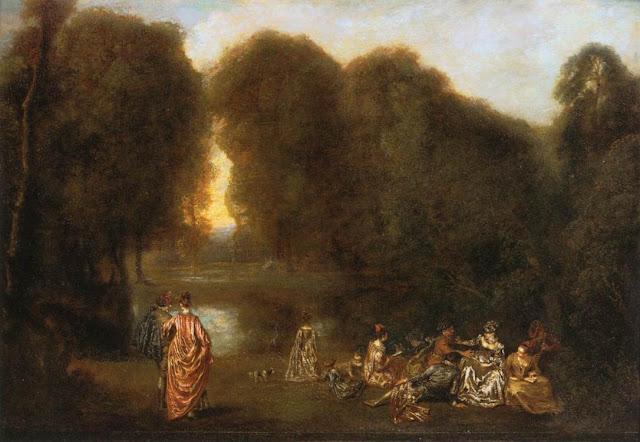 Last February, we went to the island of Ruegen on the weekend of a great storm. The Baltic raged for a day and a night, trees were torn out of the cliffs, and firefighters in the state of Mecklenburg Vorpommern.were called out two hundred times. Next morning, the coast looked innocent, as if no violence had been committed, its pale sand beaches, white rock, and calm grey sea as pure as in Friedrich’s view of the chalk cliffs, jagged as canines, guarding the inverted triangle of water beyond.
One day, a few weeks after our trip, I caught up with myself, nine months in, a full term in which....
to have a baby instead of bearing sorrow like a malignant tumour. You reach a time when you realize you’ve stopped falling in the chasm and you peer up over the edge. Even the dreams have quietened down.There was one last night that ended differently from the others, not turbulently in the darkness of a well, or boxed up in a windowless room, but in the sunlight of a boundless landscape.

I was looking for her; I'd lost her. In my dreams I was always losing her. We were supposed to be doing a roleplay job together as simulated patients for student doctors, and she'd gone missing. She must have left the building to go out for a walk, and I panicked because she was supposed to be under medical supervision, though she didn't know how ill she was, and I would have died rather than let her find out, and, after a frantic search through dressing rooms rigged in the middle of crowded corridors and staircases blocked by actors putting on makeup, and, on landings further down, by bandaged soldiers being evacuated in the middle of a raid, I reached the auditorium of a shabby Victorian theatre, but the stage wasn't being used for plays anymore, so I knew that she would not be there.

I opened a door expecting to be led outside to the concrete paths and dejected trees of the hospital grounds, but they weren't there, and in front of me was Richmond Park, on a bright summer’s day, dotted garishly with people having picnics under a cloudless blue sky.

It was definitely Richmond Park; it was as familiar to me as a back garden from all the times I had played there as a child before my father got ill and died. She used to take me there every weekend, when we escaped from her mother-in-law’s house for long walks in the woods or to sit among the ferns with our sketchpads.

In the dream, I recognized the tower blocks of Roehampton rising on the left of where I was standing, as I remembered seeing them on the way to Adam's Pond, where once we’d been chased round by a rutting deer, and another time had watched my beautiful new toy yacht drift inexorably towards a remote island of duckweed, where we had to leave her, stranded on her maiden voyage.

In my dream, I stood still and stared at the view of the park, dismayed that Elysium looked no better than a large suburban heath. Then I was convinced that it was not the fields of the dead, nor Arcadia nor a spiritual recreational ground of any kind, but nothing more than Richmond Park, and I despaired of ever finding her, as I knew she would not be there, not now, not among the living. I was sure that what I was seeing was real, because I believed that my sub-conscious would not have conjured such a homely metaphorical heaven. After the long journey through disease and war, the traveller expects, at the very least, gardens hanging over an Italian lake, a golden shore lapped by a turqouise sea, or waterfalls of refracted light in northern dales, but not Richmond Park on a Bank Holiday.

Then I spotted her, kneeling on a blanket she’d laid out on a small mound of grass, and I was pleased she was dressed in her own clothes, not in the hospital gown any more, and I saw she was on her own, and that I would have her to myself again.

In dreams, the people I love are never exactly like themselves, but I could tell it was her, even at a distance, from her short, dark, curly hair and the way she held her back so straight, and her head up, purposeful as a dancer before a leap. She looked young and blithe again, as if she had never been ill, and she was smiling and waving at me to come and join her.

I knew I would have to hurry if I was to reach her in time, because behind her the horizon started tilting, and the sky darkened and bulged; the planet was being compressed, shut down by a giant's eye closing, my own treacherous eyelids opening.

Posted by Pippa Rathborne at 00:58